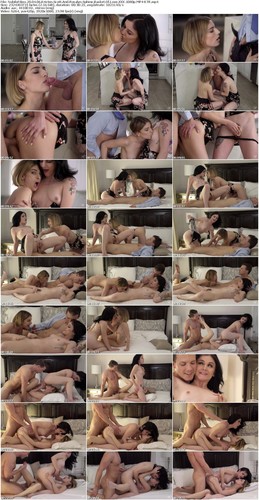 The girls are in the kitchen dying Easter eggs when Kristen gets her opportunity. She runs her fingers over Rosalyn’s in an expression of interest. When Codey interrupts them, Kristen takes the opportunity to give him a kiss that makes Rosalyn blush. Seeing that she’s making Rosalyn uncomfortable, Kristen walks over to draw her friend in and make it clear that she’s more than welcome to be a part of the fun.

While Codey and Rosalyn are getting acquainted with kisses, Kristen sinks to her knees and pulls out Codey’s hard dick. Her high heels make it easy to crouch comfortably while she’s sucking Codey off. Working to peel her dress down and unveil her breasts, Kristen eventually tires of waiting on Rosalyn to join her. She tugs Rosalyn down to a matching crouch that leaves Codey enjoying a double BJ as Kristen fondles Rosalyn’s breasts and caresses her twat.

The girls get to their feet at the same time. Kristen continues to lead the way by leaning forward over the kitchen island. Codey takes the time to cup and squeeze that ass. Then, as Rosalyn watches, Codey leans Kristen forward and shoves into her from behind. Kristen adjusts her position so her mouth is on Rosalyn’s nipples and her hand is caressing Rosalyn’s twat.

When the trio relocates to the bedroom, Rosalyn and Kristen have all the time they need to enjoy Codey’s body. He lies prone on the bed as the girls use their hands to tease him back to full mast. Then Rosalyn slides her landing strip snatch down onto Codey’s fuck stick. Kristen goes back to work with her mouth on Rosalyn’s tits as her friend rides her boyfriend. When Rosalyn collapses onto the bed beside Codey, Kristen uses her hands and mouth to suck and stroke them both.

When Kristen is convinced that her two lovers have had enough of her ministrations, she urges them both up so she can take their place on the bed. It’s not long before she has Codey pumping away between her thighs and Rosalyn riding her mouth. Hooking her arms around Rosalyn’s thighs, Kristen muffles her moans of delight in her girlfriend’s twat.